Lucara Diamond Corp’s Karowe mine in Botswana – famous for the number of large-carat stones it produces – could transition into an underground operation once open-pit mining ends in 2026. A recently completed Preliminary Economic Assessment (PEA) confirms the viability of an underground mine at the site and Lucara is now following up with a Pre-Feasibility Study (PFS), whose results should be released in Q2, 2018.

Highlights of the NI 43-101 compliant PEA include an after-tax undiscounted net cash flow of US$820 million, an after-tax NPV5% of US$451 million and an IRR of 38,9 %. The total Life-of-Mine (LOM) production is estimated at 2,72 million carats. Average LOM operation costs are put at US$49,4 per tonne. Pre-production capital costs (including a 25 % contingency, the costs of a pre-feasibility and feasibility study and hydro­geology and geotechnical testing and modelling costs) are estimated at US$195 million. 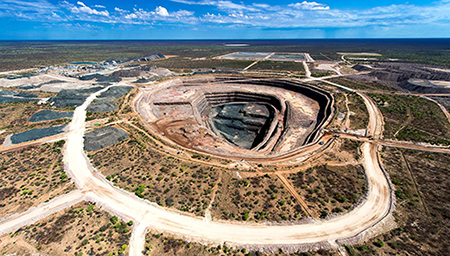 The Karowe mine in the Orapa Diamond Field of Botswana, On present plans, open-pit operations will conintue until 2026 (photo: Lucara).

“The results of the PEA demonstrate the potential economic viability for the development of an underground mine at Karowe. Underground operations are focused on the high value south lobe, which remains open at depth below the current design, and is a further indication of the potential longevity of the resource and cashflow generation at Karowe,” comments William Lamb, President and CEO of Lucara. “We have seen on-going improvement in the value of diamonds from the south lobe and the development of an underground mine has the potential to add significantly to the Life of Mine at Karowe.”

The Karowe Underground PEA presents a standalone scenario which does not incorporate the economics of the current Karowe operations except where taxes are affected based on capital expenditures. The PEA evaluates the development of a Sub-Level Caving (SLC) operation to extract the AK06 kimberlite resource, with all kimberlite being processed at the existing Karowe processing plant over a 10-year period following the cessation of the current open-pit operations.

The PEA assumes that the Karowe Under­ground will seamlessly integrate into current operations with kimberlite sourced from underground being stockpiled in the later years of the opencast operations to ensure sufficient availability to the processing facilities to maintain the current 2,5 Mt/a throughput.

The Karowe Underground targets the south lobe kimberlite resource below the current planned bottom of the open pit, expected to be at approximately 690 m above mean sea level (mamsl) (320 m below surface (mbs)), to a depth of 420 mamsl (590 mbs).

The Karowe Underground benefits from the brownfields nature of the existing operations at the Karowe mine. Since declaring commercial production in July 2012, Karowe has produced an average of 320 000 carats per annum from three kimberlite lobes. These open-pit operations are scheduled to continue until 2026 with the originally planned processing of low grade stockpiles in 2027 being moved to 2036, the end of the current planned underground operations.

The process plant at Karowe and other site facilities and equipment required to support an underground mining operation have recently been upgraded to accommodate the treatment of harder and higher density material at depth. The bulk underground mining method selected to mine the diamond kimberlite pipe measuring some 200 m in diameter is SLC. Initially the pipe will be partially offset from the pit bottom, resulting in the top four sub-levels being slightly offset from the pit bottom. These top levels plus two levels below the pit bottom will be mined by a derivation of Sub-Level Open Stoping (SLOS) ‘daylighting’ into the pit bottom.

For the purpose of the PEA, SLC was considered due to its lower initial capital cost. On completion of the current PFS geotechnical programme, further consideration will be given to a block caving option. This trade-off study will be completed as part of the PFS initial pre-feasibility work programme.

The mine design for both the upper levels SLOS and the following SLC mining, once general caving of the host rocks commences, will be similar. The sub-level interval will be 25 m, which is the international norm for the method. Owing to the reported hardness and strength of the kimberlite at 156 MPa, the mine design is intended to evaluate increasing the sub-level interval to 30 m at the PFS stage. The assumed competence of the kimberlite also allows the size of the extraction crosscuts to be developed 5,0 m wide and 5,0 m high. The spacing of the crosscuts skin to skin are set at 8,0 m to optimise the draw ellipsoids.

Access and ventilation will be provided by two ramps developed from surface boxcuts. The ramps will traverse poor ground conditions over some 2 000 m each to reach the first underground mining levels. The mine design contemplates the development of twin 6,0 m wide and 6,3 m high ramps to cater for larger haul trucks. The twin ramp system will be required to facilitate the planned production rate of approximately 7 500 tonnes per day (tpd) of kimberlite and country rock.

Following extraction from the Karowe Underground sub-level, kimberlite will be trammed to the Karowe process plant where it will be processed using existing crushing, milling, XRT, DMS concentration and final recovery facilities.

A number of opportunities have been identified to enhance the underground project and these will be evaluated in the PFS. As mentioned, consideration will be given to other mining methods (for example, block caving) to reduce operating costs, and reduce dilution and tramp steel reporting to the plant while the potential exists to develop early access to the underground to de-risk mine dewatering, geotechnical work and remove constraints to future production ramp-up.

In addition, underground mining optimisation opportunities exist at higher throughputs which are expected, if realised, to have a positive impact on operating costs. The PEA also points out that it might be possible to decrease the operating costs through the use of automated production load-haul-dump equipment. 